The aim of this operation was to establish a bridgehead across the river Rhine for the main Allied advance into Germany. On 24 March 1945, the Rhine crossing started with a ground offensive, Operation PLUNDER, followed by air landings, Operation VARSITY, 10 hours later. The main objectives for 6 Airlanding Brigade were two road bridges over the River Issel, to the east of the Rhine.

After heavy losses at Arnhem, the Glider Pilot Regiment (GPR) was severely short of pilots. Army and RAF personnel were recruited at great speed to train or re-train as glider pilots.

Despite inexperienced glider crews, ground smoke and heavy anti-aircraft fire, the operation was deemed a complete success. In his after-action report, General Chatterton, the commander of the Glider Pilot Regiment concluded: “The fact that the Regiment was carrying out an operation of a new kind with mixed and inexperienced crews into the face of the enemy must give rise to mistakes. That the pilots succeeded as they did was all the more remarkable.”

Although a success, the Glider Pilot Regiment suffered severe losses during the operation. Out of the 890 GPR personnel that departed on VARSITY, over 20% were killed or wounded. 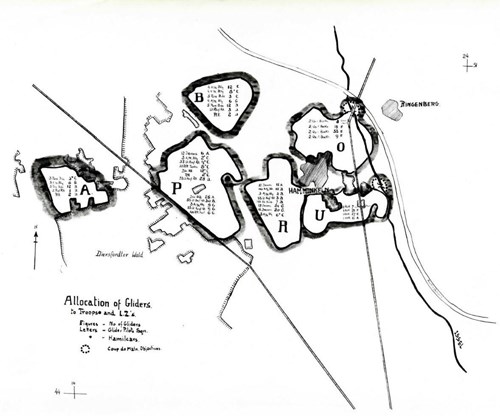 David Brook joined the Glider Pilot Regiment from the Royal Armoured Corps and Green Howards on 29 March 1944. After successfully completing his flying and glider courses he was posted to C Squadron, followed by E Squadron with whom he took part in Operation Varsity.

Together with his co-pilot Sergeant Whitton, he flew a Horsa glider destined for Landing Zone ‘O’, besides the railway line at Hamminkeln. They carried a platoon of soldiers from the Oxfordshire and Buckinghamshire Light Infantry ordered to take the nearby railway station. During the battle Brook was injured in the shoulder.

After the end of the war, SSgt David Brook was posted to D Squadron in Palestine before being demobilised from the Army.

For years he was a member of the Glider Pilot Regimental Association and the editor of their ‘The Eagle’ magazine. His account of his experience in Operation Varsity is reproduced on the next tab (Portrait of a Pilot) 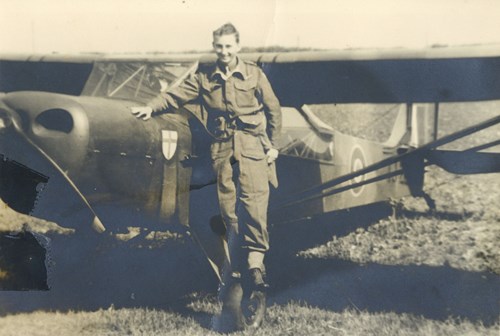 John Phillips attended No. 36 Air Observation Post Course between 24 August and 8 November 1944. He was posted to 658 Squadron in early 1945 which was then operating in the Dutch/German border area around Venlo. The Squadron made its way through Germany and were located around Kiel when the war ended. Phillips stayed with the unit when it was transferred to India. He was appointed Commanding Officer of the Squadron from June 1946 until his demobilisation in August.

The family’s nickname for Phillips was ‘Deadbeat’.

Phillips and Smith were members of 658 Air Observation Post Squadron. The following notes are faithfully reproduced from the Squadron’s war diary.

“The Army Commander was taken up for visibility recce prior to airborne landing. A Flight and B Flight started on CB programme for Operation Plunder – the crossing the RHINE. 3 sorties were flown in the early evening, but very little was seen owing to heavy smoke and haze. One sortie was made at the request of 30 Corps to locate origin of oil reported on river RHINE, but although pilot flew down to WESSEL (2240) point of origin was not located. C Flight reported preliminary bombardment for this operation began at 1800 hrs.”

“After airborne landing which took place at 1000 hours. A Flight carried out several sorties to spot enemy Flak. B Flight observed guns firing from 28573 and S.P. guns in pits at 113577 – targets were engaged with 7 and 64 Med. Regts. respectively. One Jagpanther [sic] at 077551 was seen to hit two of our tanks and was map spotted and engaged as Mike Target with 7 Med Regt – Capt PT Wykes and his observer LAC McNairney took off on a C.B. sortie across the RHINE. Shortly after take-off his wireless signals ceased and some time later information was received from an O.P. of 147 Fd. Regt. That an Auster had been seen to hit the ground with its tail shot away, and nobody came out of the wreckage. Confirmation of the crash could not be obtained during the evening. C Flight had nothing of importance to report apart from the safe landing by parachute in the centre of their A.L.G. of American airman after baling out of a Dakota.”

“Major General ROBERTS (G.O.C. 11 Armd. Div) was flown from DIEST to Tacl. H.Q. at WINNEKENDONK. Several sorties were flown by A Flight to locate 3 hostile gun flashes, these were seen reported. B Flight carried out 7 C.B. sorties during the day in good visibility. 1 S.P. A/Tk gun seen at 040557, guns located North of REES 093573 and 086570, these targets were engaged with 64 Med. Regt. These guns later received Scale 2 from whole AGRA. A single S.P. gun at 040475 was engaged by one troop of 121 Med. Regt. Scale 10 – rounds observed in the target area. Further guns firing from 023523, 106593 were engaged as Yoke targets by Scale 2 from 5 AGRA and 64 Med. Regt. Respectively. A Panther tank was seen at 063573 and reported to 5 AGRA, but not engaged. B Flight Commander (Capt K.A.H. Knight) visited 147 Fd. Regt. For news of Captain WYKES and his observer, who were missing from the previous day. Personnel of the Regt. Confirmed the crash, and that nobody had got out of the aircraft which was completely burnt. The Regt stated that they believed that both pilot and passenger had been buried. Apart from carrying out recce for an A.L.G. East of the RHINE in the area of N.W. WESSEL from the air, C Flight had nothing of importance to report.”